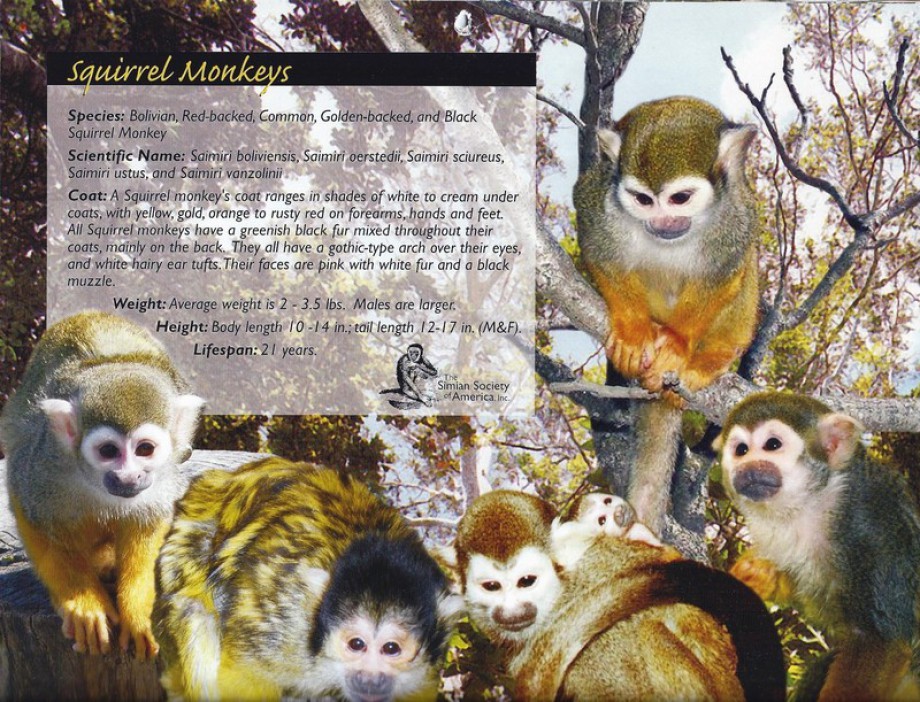 GENUS: Saimiri (squirrel monkeys are the only genus in the subfamily saimiriinae)

Most scientist agree on 5-6 different species:

1)Saimiri oerstedti – Central American. These are listed as endangered and found in Costa Rica and Panama

2)Saimiri sciureus – referred to as the “Common Squirrel Monkey”. They were initially captured for the pet trade and medical research. They are not endangered. There are several different sub-species.

APPEARANCE: Squirrel Monkeys are olive colored with dense short fur. They have more yellowish orange fur on the back, forearms, hands and feet. Their throat and their ears are white and their mouths and chin area are dark brown or black. They have white masks of fur around their eyes, and dark brown or black coloration around the mouth and chin. They are a slender monkey weighing only 1.5-2.5 lbs and are 10 – 14 inches in length. Their tail is another 14-16 inches. Their heads are elongated (pronounced occiput or back portion of skull) allowing for their large brain.

Since 1984 scientist have divided squirrel monkeys into 2 main large groups being separated by the shape of the white above their eyes. If the shape is pointed (Gothic) they are in the S. sciureus group. The fur is higher and the dark fur between their eyes forms a deep V. If the shape is more arched or rounded (Roman) they are in the S. boliviensis (including Vanzolini) group. The white fur on this group does not extend as far up the forehead and the V pattern between their eyes is very shallow. The tails of the boliviensis group are also much thinner than in the sciureus group.

Origin: The common squirrel monkey is a New World Monkey found in Central and South America. They are most commonly found in the countries of Bolivia, Brazil, Colombia, Ecuador, French Guiana, Guyana, Peru, Suriname, Paraguay, Suriname, and Venezuela.

Habitat: Wild Squirrel Monkeys prefer rain forests, primary and secondary moist forests, riverine forests, and mangrove swamps. They are one of few primates that can survive despite diverse habitats. They exist in the most lush green tropical forests to disturbed forests. They live mainly in the middle canopy (are arboreal), but will occasionally come to the ground for food or play. The vegetation in the middle canopy protects them from birds of prey.

Diet: The common squirrel monkey is considered both frugivorous and insectivorous (or omnivorous) with their diet consisting primarily of fruit and insects. They love berry-like fruit on branches and a variety of insects. Squirrel monkeys rarely go after insects that are in motion and prefer to capture stationary insects on plant surfaces. They prefer caterpillars and grasshoppers over other insects. They also look for mollusks (snails and crabs) and small vertebrates, such as tree frogs. They will also occasionally eat seeds, nuts, eggs, nectar, flowers, buds, leaves, and gum.

In the wild, aggression and competition for food depends on the species of squirrel. The common squirrel monkey has more intra group competition due to a habitat with large amounts of available fruit. These monkeys feel the need to stay and protect their food source. Other species who live where fruit is more scarce, simply move on to another patch after a short time.

Captive Diet: 75-80 % of the diet should be a commercial New World Diet. 15-20% should be fresh fruits and vegetables. 5-10% should be high protein treats such as eggs, yogurt, and nuts. And 2-5% should be insects. Mine particularly love meal worms and recognize the container as soon as I get it out of the refrigerator. They are frantic to get them and would eat any amount you fed without ever pausing!

Predators: Birds of prey like falcons. Also snakes and felids.

BREEDING: Female squirrel monkeys become sexually mature at 3 yrs, males at about 5 yrs. Their gestation is 150-170 days. Females generally give birth to only a single infant. Only the mothers care for the young. Fathers ignore the infants but after the first month other females will help carry and care for the infant. There is a wide range of weaning ages of the young between different species. It can range from 4 to 18 mos with the average being 12 mos. Infants will begin to eat bits of solid foods at 6 weeks. Male squirrel monkeys gain weight during the two months prior to the breeding season, taking on a "fatted" appearance, which is actually a storage of water. During this period of growth they can gain up to 20% of their body weight and the larger they appear, the more attractive they are to females.

As squirrel monkeys are matrilinear, it is important that all females of a new group are related to each other, that is, that they come from the same natal group. The introduction of unfamiliar females to a small group with several adult females can result in much aggression with severe injuries. Sometimes unfamiliar females are tolerated by group members, but they will hardly ever become a full part of the group, and there can be stress for long periods.

The minimum number of breeding females in a group should be five. Smaller groups tend to have less reproductive success. The onset of the reproductive cycle is stimulated by social behavior between adult females. Another advantage of multi-female groups is the improved development of the infants, as they can interact with peers.

A maximum of two adult males should be added to these females. Additional adult males will not be accepted by the others in the group. And as with females, it is preferential that the two males be related animals, e.g. brothers. Some studies show that female squirrel monkeys stop breeding if the same adult males are in a group for more than four years. Therefore, and also to prevent inbreeding, adult males must be replaced every four years by other, unrelated adult males.

As Saimiri groups tend to form sub-groups, inside quarters should consist of at least two cages, but preferably more, all connected with each other.

There is a surplus of males in captivity as breeding groups have more females. Females are difficult to obtain in captivity as they are most always retained by zoos or breeders. It is possible to form all male groups especially if young males who were in subgroups together in wild populations are used.

Life Expectancy: Squirrel monkeys can live up to 15 years in the wild and about 20 years in captivity.

Social Behavior: Little is known about their social behavior in the wild. Monkey Jungle in Florida and Dumond Conservatory have done a good job in creating a pseudo-wild type environment at their facility. Numerous studies were done giving us much of the information we know on social behavior.

Bands or troops of squirrel monkeys are multi-male/ multi-female and commonly range from 12-100 (even to 500). These large groups can, however, occasionally break into smaller troops. Also it is not clear whether these larger groups are a single unit, or are in fact composed of several smaller units traveling together during periods when food is abundant.

The adult females function as the core of a Saimiri group and all other group members are attracted to them. There are clear sub-groups of adult females, juvenile females, adult males and juvenile males. In some species, the males are sexually segregated and live at the periphery of the group, except during the breeding season. Outside the breeding season, the females can react very aggressively towards approaching males. Saimirigroups are matrilinear. Young males leave their group around the age of three. Adult males stay for two or three breeding seasons until other males take over the group.

Interesting Facts: Squirrel monkeys are diurnal and arboreal (like most New World Monkeys).

Squirrel Monkeys have the largest brain to body mass of all primates. It is about double the proportion of humans.

Squirrel monkeys spend more than half of their day traveling and foraging for insects. About 10% is spent feeding on fruit and nectar, another 10% is spent resting. The remainder is spent in social behavior and self-grooming.

They are usually quiet but will utter loud cries when alarmed. They have numerous vocalizations including warning sounds for protection. In captivity they are particularly vocal in response to noises such as vacuum cleaners and ice machines.

As do most monkeys the common squirrel monkey will urine scent (spread urine on the bottoms of the hands and feet). The purpose of this behavior is to mark their territory, protecting it from other monkeys. They also have a musky glandular secretion throughout their fur (especially on tail) as scent to mark territory or to leave a trail for others of the troop to follow as they go through the trees. This odor turns away hunters who might otherwise kill them for food.

They can leap horizontal distances up to two meters.

The tail of the common squirrel monkey is only prehensile when they are babies, not when they are adults. After infancy the tail is used more as a tool and for balance.

Female squirrel monkeys have a pseudo-penis that they use to display dominance over smaller monkeys.

Squirrel monkeys are quadrupedal and prefer small branches only one and two centimeters in diameter.

Herb gardens with monkey safe plants and medicinal plants are enjoyed by squirrel as well as other monkeys.

Saimiri are the second-most used primates in captive research (the first being the rhesus macaque) and have been studied widely across a variety of institutions.

Herpes saimiri : Is a virus carried by about 70% of wild squirrel monkeys. This does not cause disease in saimiri (or other larger species) but can be fatal for marmosets , tamarins , owl monkeys , and titis. It is transmitted by the oral fecal route (ingestion of feces) and therefore strict hygiene is mandatory for captive environments containing mixed species. It is recommended that these species not be housed together. Also no sharing of bowls, water bottles, scoops, rakes, etc is recommended. Hand washing between species by caregivers is crucial.

Saimiri and Cebus (capuchins) are often seen in mixed-species groups. These interactions are peaceable and squirrel monkeys benefit from the extensive alarm calling system of Cebus, which serves to alert group members of potential predators. Squirrel monkeys also benefit by gaining knowledge from Cebus as to available food sources (esp fruit patches).

Squirrel monkeys sleep hunched over with their tails curled between their legs and up over their shoulders. Pressure sores can develop at the base of their tail with the use of flat shelves or boards. Preferred perches for sleep are large diameter tubular perches. The contour provided by these provide a more stable and comfortable resting surface.