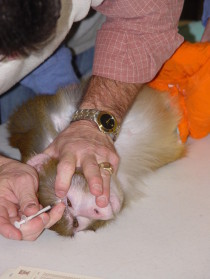 TB injections are often placed in the eyelid for easy observation for reaction, but they can also be given in the abdomen. Rhesus macaque (Macaca mulatta) is restrained by owner during the procedure so the monkey does not have to be sedated.

Disclaimer: The following represent reasonable recommendations but they are not totally foolproof... They are only guidelines and as such, and do not mean that what is stated here is correct in all situations without consideration of the context. Contact your veterinary professional.

The vaccine protocol I have used successfully and with no secondary problems or reactions to date are as follows:

Imrab R by Pittman-Moore which has been recently bought out by Rhone Murieux/Merck, or Defensor killed Rabies vaccine by Pfizer. It is important to stress that it must be a killedvirus vaccine given intramuscularly and that there have been no reported cases of primate rabies in the United States. Public Health Officials in most states and at CDC seem to give a partial support to quarantine versus euthanasia if the efforts are made to immunize annually. If a primary care physician really presses the issue then a biting primate may be sacrificed anyway, but at least it's a start to get public officials support. One could use the Human Diploid Rabies Vaccine, IMOVAX by Connaught which is much more expensive but does not seem to carry any more protection than the two above in the zoo circles I have been in. [Most zoos do not even vaccinate for rabies it is such low concern due to confinement.)

Vaccine by Merck & Company, if the primate is less than 1 month of age then a second date is recommended after 15 months of age. O.5 ml is given subcutaneously. Human literature recommends not giving concomitantly with the DTP [diphtheria, tetanus, pertussis) vaccine but Merck goes on to say if done simultaneous to use separate injection sites. I do not use or recommend the combination DTP only the tetanus and have had no side effects or concerns. It is also recommended (by the AAZVP) to booster at 10-12 years of age.

Tetanus Toxoid Adsorbed ultrafined by Wyeth Laboratories. This is recommended to any part of the country in which Clostridium tetani is present. The basic immunizing course consists of two (primary) doses of O. 5ml each, given at an interval of 4 to 5 weeks, followed by a third (reinforcing) dose of O. 5ml 6 to 12 months later. The injections are given intramuscularly and repeated every 10 years after the initial pediatric series or possible exposure. Some individuals or groups booster their primates yearly as a precaution with no side effects and appear to receive heavy protection from C1. tetani.

Trivalent oral Polovirus or IPOL (Poliovirus Vaccine Inactivated manufactured by Pasteur Merieux Labs and distributed by Connaught Labs, Inc. in the USA.) A primary series is initiated after 6 months of age in my practice with the first dose followed in 4-8 weeks with its booster and final follow up in 6 to 12 months of the second immunization. This vaccine is primarily given to the Great Apes but can be given if there is any potential for public exposure. I have found that Public Health Officials prefer to have this in the vaccine protocol of privately owned primates.

Tuberculosis testing is also an important part of the public health protocol. Coopers antigen given to bleb the skin (intradermal) of the eyelid or the abdomen area. I prefer the eyelid because it is more easily monitored and must be reviewed at 24, 48 and 72 hour intervals by your veterinarian.

There are two laboratories in San Antonia, Texas which can do a quick turn around screening to insure the safety of your other primate members before combining them with a new purchase. If you are a first time owner this helps the Public Health Officials to give you better support in the event of a bite to a human and quarantine procedures.
Editors Note: When testing Macaques for the Herpes B virus, wait until an animal is over one year of age as testing before this time is unreliable.

Here are some additional comments from Dr. Dan G. Danner, Animal Medical and Surgical Hospital, Tulsa, Oklahoma...
Depending on your source and reference, the recommendations seem to vary slightly. The preceding recommendations compare with the recommendations of the American Association of Zoo Veterinarians. The stress is to pre-immunize the human contacts, and for owners to be responsible when taking primates into the public. Many states will vary on their approach to the public health side because of the limited research information available. I recommend that your veterinarian get with these officials very early and establish a positive rapport prior to a crisis arising. It seems most problems occur at the least convenient times or on weekends. By my experience in Texas with Lion Country Safari and in private practice in Oklahoma, it is far better to work from the top down with a policy in place than to work up the bureaucratic ladder as few city or state employees want to take authority, and many are unsure as to what public health concerns are really at risk. Another helpful recommendation to private owners is to use a microchip identification such as Home Again by Schering. This assists in proof of ownership, and all the main animal shelters in the country have scanners. They can assist if your primate is lost or stolen.
Primate Symposium Notes Milwaukee, Wisconsin 14 August l, 1998