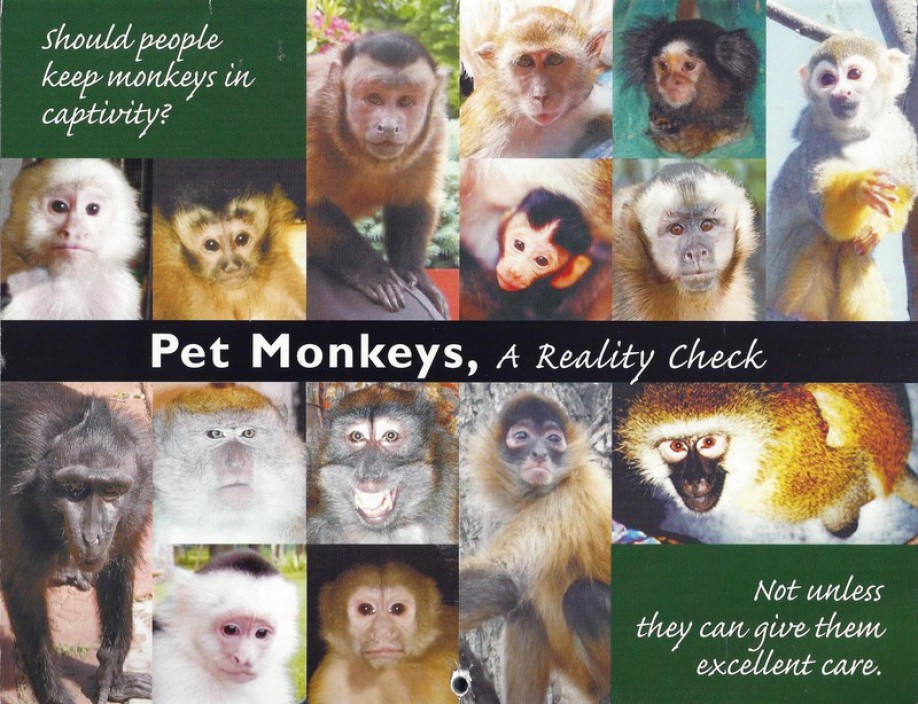 What do monkeys eat?

How long do monkeys live?

This depends on the species of monkey. With the exception of the tiny monkeys, marmosets, tamarins and squirrels, many species live 30-40 years in captivity with a few living into their early fiftys.

Yes they can, but not like humans. Monkeys do not have a voicebox that we use to speak. Monkeys have many vocalizations and use body language to communicate. While they cannot speak words like we use, they are capable of learning and understand much of what we say. A few have even learned some sign language.

Some caretakers become quite adept at "reading" their monkey's body language, as well as, understanding what their vocalizations mean.

How much does a monkey cost?

The initial cost of a monkey depends on the species of monkey and the breeder selling it. An infant may be prchased from a USDA licensed breeder for $2,000 and up for a marmoset, $6-8,000 for a capuchin, with some species costing upwards to $10-12,000. While this may seem like a lot of money it is miniscule when looking ahead to purchase adequate caging, specialized foods, exotic vet care, and enrichment for the monkey who may live 20-40 years.

Monkeys have not been imported from the wild for pets since the Lacey Act passed in 1975. Monkeys living in pet homes today are products of many generations of captive breeding, which is regulated by the U.S. Department of Agriculture. This has produced healthy pet monkeys that do not carry diseases that are dangerous to humans. The Centers for Disease Control (CDC) has stated that there has never been an instance of a human contracting a disease from a pet monkey.

Aren't monkeys better off in a zoo with professionals that know how to properly care for them?

There is no evidence that suggests that monkeys living in zoos receive better care than those living with responsible owners. In fact, the opposite is true in some cases. Monkeys can benefit from the individulized care and nurturing environment of a private home. Private owners are often able to give their monkeys more enrichment than zoos are able to provide for displayed animals. Not all animals in zoos live in nice big natural looking exhibits. The holding areas behind the scenes are often cramped and stark.