When an animal is kept in captivity, efforts must be made to provide a physical and social environment conductive to their well being. The term “well-being” can refer to the physical health of the animal, or the psychological vigor of the individual’s mental state. Primates are intelligent animals with highly developed social skills, and it is an ethical imperative to provide them with not only the best possible care, but also with an optimal environment. Growing evidence from research indicates that primates living under deprived conditions without appropriate stimulation may suffer from physiological disorders, such as impaired immune or reproductive system, or may exhibit abnormal behaviors. Symptoms of behavioral disturbance often include bodily impairment, chronic self-mutilation, failure to respond in species-typical fashion to social partners, or avoidance behavior towards its environment and other individuals. Methods of preventing such behaviors or amending them often include enrichment. 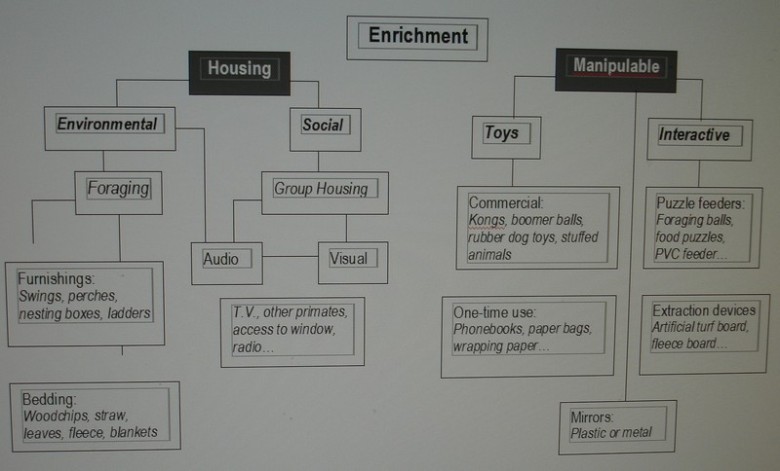 Enrichment techniques are varied and particular to each individual primate, but all well-constructed programs should be designed to promote a wide range of species-specific with the well-being of the animal taken into consideration and reduce or inhibit abnormal behavior. There is no set standard of enrichment that is appropriate for the entire primate taxon. However, there are general categories of enrichment that should be targeted in any method of care; these are included in the outline below. In addition, to prevent boredom, novelty should be regularly introduced to the environment (e.g. by rearranging furnishings or rotating enrichment devices).

The focus of this project is feeding enrichment for monkeys commonly kept in captivity. In their natural habitat, primates spend a high portion of time foraging and exploring their complex environment. Life in barren enclosures drastically reduces such basic activities. When presenting the enrichment, it’s important to rely on studies of species-typical patterns of behavior to ensure its suitability. Even closely related species (i.e. members of a genus) can differ substantially in behavior, and even within species individual characteristics must be accounted for, not including differences in age and gender.

General Information: vertical dimensions are typically more important for these nonhuman primates, with adequate postural support at multiple heights. Suitable material for perches and climbing structures are especially crucial because cebids lack ischial callosities for sitting and squirrel monkeys are prone to hypothermia, especially when stressed. Also due to their high susceptibility to stress, squirrel monkeys and marmosets require an area of retreat from other monkeys within the proximity. Consideration should also be given to their tendency to eat small amounts of food over long periods of each day. They often take a bite of food, and then discard it to be retrieved later in the day. 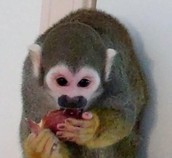 Habitat: Found in Central America and northern South America, inhabiting the intermediate and canopy parts of virgin and gallery rainforests. Squirrels are considered to be gleaners in that they pick through leaf matter in search of food and slow moving prey.

Group Structure: Normally in the wild, these monkeys congregate in colonies of anywhere from 10-40 individuals. Members participate in little tactile contact, such as grooming, other than “snuggling” during sleep and rest. However, acoustic, vocal, and especially visual communication play important communication roles. There are a variety of facial expressions, some of which are associated with vocalizations, but mainly visual communication is observation of the actions of others within their group. Members pay close attention to all movements and act accordingly.

Diet: It consists mostly of fruit and vegetation, supplemented with insects. 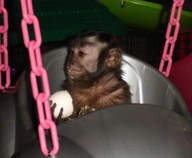 Habitat: They inhabit most of Central and South Americain a multitude of environments consisting of evergreen, rain, and lowland forests near mangrove swamps. Capuchins have also been observed descending to the ground to forage or drink from a nearby water source. They have well developed thumbs and are adept at using their hands in manipulating objects. Their tails are also semi-prehensile and can be used to support the monkey for short periods of time.

Group Structure: Capuchins are generally very sociable monkeys and spend a great deal of time grooming and playing. Communication consists of a variety of facial expressions and vocalizations, often connected with the emotional state of the individual.

Diet: These often include a wide range of fruits, nuts, buds, seeds, and insects and small birds and mammals. It is also not unusual for them to retrieve eggs from birds’ nests.

Habitat: Found throughout all levels of rain, gallery, and dry forests as well as savanna woodlands in South andCentral America, even descending to the ground in search of insect prey.

Group Structure: They live typically in pairs or family groups and are highly territorial. Communication consists of a variety of high-pitched vocalizations, often described as being bird-like chirrups.

Diet: Consists of fruits, flowers, amphibians, and invertebrates. Plant exudates or gums are also consumed, as marmosets are adapted for gouging holes in plants.

General Information: Although old world monkeys will typically spend a great deal more time on the ground than, virtually all flee upward when disturbed, hence the enclosure should be designed for use of the full volume of the cage. Species, macaques more so than guenons, are also highly destructive and their strength is considerable compared to that of the smaller new world species.

Habitat: This is the largest family of monkey inAfrica, spread widely through savannahs, woodlands, and extremely dense rainforests. Savanna monkeys in particular are seldom found far from a water source. This species is highly adaptable and quick to take advantage of land that has been exploited by humans,

Group Structure: Male Savannas actually live in groups with several females and their infants. Social grooming is also more prevalent among these monkeys than other Guenon species. To communicate, most Guenons rely heavily upon vocal expressions and visual signals, but less so on facial gestures compared to other primate species, such as capuchins and macaques. They are also not as socially active.

Diet: Omnivorous by nature, these monkeys consume a variety of plant matter such as bark, savanna grasses, thorns, seeds, and insects. 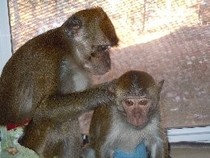 Habitat: Macaques, second only to man as being the primate with the widest natural distribution, inhabit every continent except Australia, Antarctica, and Europe. They are highly adaptable and adjust easily to a new environment. Species are both arboreal and terrestrial and are opportunistic feeders.

Group structure: These monkeys live in groups varying from 6 to 50 in number with a pronounced dominance hierarchy among both sexes, further complicated by sub-groups and alliances. Above all, macaques are very sociable, spending long periods of time grooming and engaging in multifarious relationships.